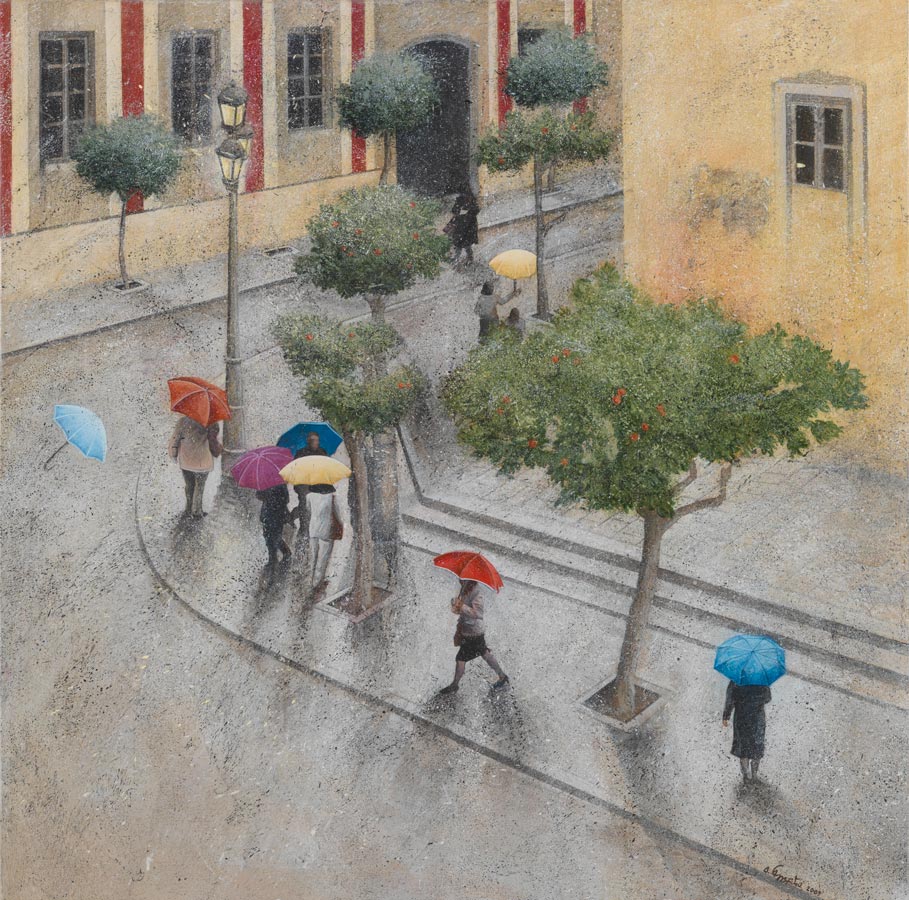 When Lautréamont wrote, in the Chants de Maldoror,[1]  of “the beauty of an umbrell’ s chance meeting with a sewing-machine on a dissecting table”, he automatically turned the issue of love into an issue of death. The umbrella is assigned, symbolically, a male content; the sewing-machine, a female content. Their ‘encounter on a dissecting-table’ indicates a meeting leading to death[2].  Thus the enjoyment of beauty is turned into a death-lust. It is a procedure that belongs in the context of the machines célibataires, the ‘bachelor machine’, so we are told by the 1976 Paris Exhibition of the same name. The name is due to Marcel Duchamp’s painting Le Grand Vitre; it refers to the gradual mechanization of humankind, and hence to its isolation (‘bachelor’) and its death in the clutch of industrial civilization. The machine célibataire is consequently defined as “a fantastic icon turning love into a mechanics of death[3].

This was one of several thoughts that crossed my mind as I stood in front of Daphne Angelidou’s paintings – taciturn works, works of isolation and seclusion.

Angelidou shows us city streets where the dominant colour is gray, with some shades of ochre on the walls of the houses. These are chill, squared-off space, the vanishing-point of the perspective lifting upwards rather in the Byzantine manner, as if to make it harder for the people to walk along. It is a device that turns the whole work into a stage set maquette, where people turn into signs of people, into anthropomorphic bits of paper pasted on to the maquette. Here and there are vulnerable beings, genuine ‘unmarried machines’, grayish and in a pose that enacts, without actually being, movement – as though a magic wand had suddenly frozen everything where it stood. The ensemble simultaneously suggests both waiting for reincarnation and waiting for life.

All these forms are holding an umbrella, the most colourful element in the pictures and the most lively, until we remember that now we even paint our dead.

With movement frozen, the forms give the impression that the umbrella is a fixed accessory of theirs; that it exists only thanks to the momentary event of rain, which likewise turns into a fixed and lasting state. Only, the umbrella now loses its male identity. It is made feminine. The straight part of the grip loses its phallic quality and is covered entirely by the femininity of the bend, by the curved and hollow thing which it normally covers and contains. When in place, virtually the whole of the head and face are covered. These umbrellas make the space colourful, more cheerful and kinetic. Only, the cheerfulness builds on a stealthy and dominant grief. It is under a constantly protective umbrella that people appear, showing modern man’s constant need for cover and protection, and hence the omnipresence of a threat. The threat is prima facie from the rain and from nature, which is to say from themselves, as nature and as body, and by the same token from the Other. They are threatened by encounter with the Other and remain on their own, surrendering their human rights to cover and protection. The umbrellas, more real, take the place of the human being and dance over the wimpish ‘living dead’, relishing their triumph. They prevent earth and sky from mating, poking in between them. They prevent the great generative get-together, but at the same time are a symbol of a colourful and apparently happy maternal protectiveness that prevents the meeting with the father. In the old days the sky was a man and earth was a woman, as too were the cities. Where the get-together happens, where the umbrella is absent, there the fruit is. In Angelidou’s paintings it is the trees, free in an upward direction, that get the serenest and most natural hues.

The one and only hope is the umbrella that the wind sweeps along, yellow as the anxiously-awaited lifegiving sun.

The streets apart, Angelidou takes us to the café, a space likewise indicative of human seclusion, to the traditional male public space that women remain outside, the glass windows of the façade turning it into a miserable screen as of a shadow theatre.

At the far end of one café, there is somebody making a phone call, in the safety of being distant and not present in the body. At another there is somebody outside reading a newspaper that (like the umbrella) covers the reader’s whole head. Here the passive reading of events stands in for the human reader’s active involvement. Next to one of these readers sits a blind man, giving the ironic and at the same time tragic impression that they are one and the same person.

Here I shall end my brief furore and end with a painting that for me holds, with an air of metaphysics, the germ of an answer to the questions posed above. It does so because the work as a whole is instinct with hesitation, doubt, indecision, and questioning. Thus it potentially contains a kinetic quality; nothing here is as yet done and dusted.

A person is standing with an umbrella of blue – the colour of spirituality, of the air, of the mind, of thought – rooted to the ground almost as much as the tree nearby, and with a body containing in posse both genders. This she or he is standing perplexed in front of the door of a house: the door is open but obscure, murky almost. Further to the right is a lighted window at which a second human figure appears in a pose suggesting relaxation and waiting. Under the tree is a table with a tablecloth of red – the colour of blood and life, a revolutionary colour – dominated by an air of impatience for a feast to begin. Almost it might be waiting for the encounter of the two humans. Here the table is no longer a dissecting-table, but potentially a festive board for the awaited, but how alarming, encounter.

We are only a step from the moment when the spell that had frozen the world into immobility is lifted so that everything can come to life. We are, that is to say, at the threshold; also the human being is gazing at the door, which is the door of life itself. The meaning of life is not “given”; instead, we are called on to create it.

2. Michel Carrouges, ‘Mode d’ Emploi’, essay in the exhibition catalogue Machines célibataires. The exhibition of this name ran from May to July 1976 in Paris at the Musée des Arts Décoratifs. A catalogue in French and German was issued, in which the machine célibataire problem was reviewed for all forms of artistic creativity: plastic arts, writing, film and theatre.↩